Like most towns in the great plains, Aberdeen was started as a railroad town. Charles H Prior, the town site agent for the Chicago, Milwaukee, and St Paul railroad filed the first papers at the land office in Watertown, part of the Dakota Territory, for a town to be located at the spot where his employer's rail line was expected to intersect the Chicago Northwestern's proposed line. Alexander Mitchell, president of the Chicago, Milwaukee, & St Paul, named the town-to-be Aberdeen, after his own hometown in Scotland. The first plat of land was deeded on the 3rd of January, 1881 and the first train arrived July 6th with the post office established that August. In 1885, Aberdeen was named the Seat of Brown County.

The convergence of rail lines made Aberdeen a natural stopping point for military troop trains; starting when South Dakota's First Infantry Regiment was welcomed home here by President McKinely in October of 1899 after returning from duty under General McArthur in the Philippines during the Spanish American War. The rail lines also played a vital role in delivering recruits to the US Army in both World Wars, and when the USO and Red Cross built a canteen in the Milwaukee Rail depot in 1943, they couldn't have known that it would become one of Aberdeen's most memorable locations.

From it's opening on the 14th of Aug until just before Christmas, the canteen provided over 150,000 free meals to troops passing through the station; a remarkable endeavor, but the real history was still to come. 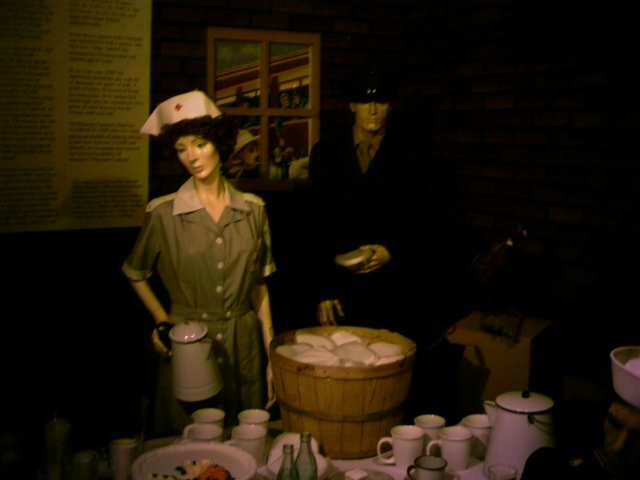 Local farmers, still eager to contribute to the canteen despite being well past the harvest season, donated pheasants from recent hunts to the canteen and started a trend that would lead to the canteen becoming unofficially renamed the "Pheasant Canteen". With an average of over 500 soldiers per day traveling through the depot, the Pheasant Canteen continued to give a free meal to every serviceman, highlighted by the now famous pheasant sandwiches. Any soldier arriving at the depot on their birthday would also receive a special cake, and there was a decorated tree each Christmas and colored eggs each Easter. When the Pheasant Canteen closed on the 31st of March, 1946, between 510,000 and 600,000 servicemen had been feed, all at no cost to themselves or the military. Every meal was donated by the residents of Aberdeen and 40 other towns within a 75 mile radius.

Of course, support for the serviceman was nothing new to the Aberdeen area.

The VFW had formed a presence here as early as 1903 (fourth oldest continuously active post), and The American Legion followed 1919 when the call first went out to constitute posts. By 1921 the American Legion was running their own veterans employment program in the city, and had a theatrical troupe that performed annual plays at the local theater, along with a post band.

The post chose the name of Sidney L Smith, in honor of Private First Class Smith who was killed in action while serving as a dispatch runner in Soissons France, July 20th 1918 as part of Co. L, 18th U.S. Infantry, 1st Div.

While born in Canton, Il (1896) and having gone to military school in Roswell, NM, Sidney L Smith had moved to Aberdeen in 1915 and had joined the military as part of the South Dakota national guard. He was stationed at Camp Pontis in Mobridge, SD when he transferred to the 148th Machine Gun Battalion. He later transferred again to the 1st Infantry Division, 18th Brigade, Company L where he saw action at the Battle of Cantigny, and was in the trenches for 70 days at Montdidier, France. In Fosh's big drive, Smith's company took part in the battle of Chateau-Thierry, and then Sessions, where he was listed as missing in action for 9 months before Congressman Royal C. Johnson assisted the Red Cross' efforts to determine his fate. Smith's status was changed from MIA and a telegram was sent to his family from the adjutant general's office at Washington, DC, it reads as follows: